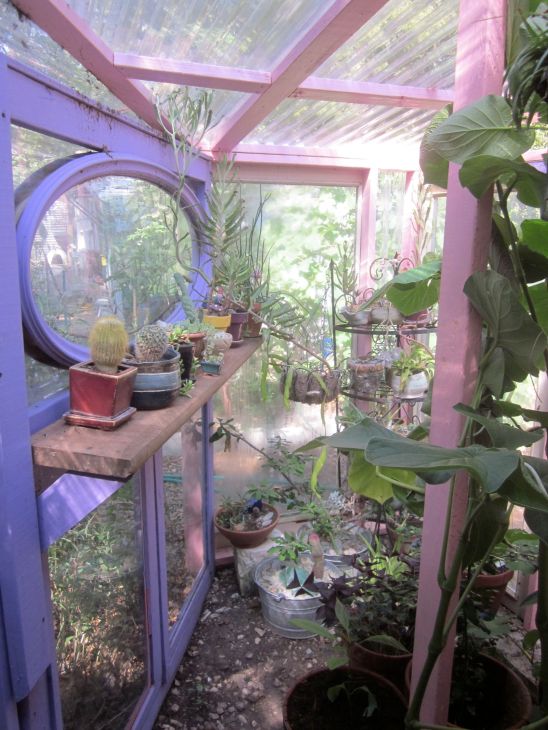 Just before the Austin housing bubble went POP! and Code Compliance hassled the Cathedral of Junk into becoming a permitted structure, the Cathedral’s creator, Vince Hannemann, brought me by his friend Hanson’s house, “The Old Place.” Nicknamed “the Professor,” Hanson is a south Austin old-timer who collects special rocks from the railroad tracks down the street. Over the decades a landslide accumulated: cairns in the yard, smothering steps and porch, covering the house’s floor, stacked around the bed in a nest. Then the water heater burned a hole in the house’s center. Rain-soaked sheetrock melted down on the rocks below. The Professor was living on the back porch with his red dog surrounded by piles of stones.

We were visiting The Old Place to help move windows stacked against the house, and to take some home. They’re weatherproofed with coats of mistint paints, pink, lavender, and lime dribbles down the panes. Some were salvaged from the University of Texas’ Mary dormitory before its demolition and had been there forty years. The Professor says they looked out on Town Lake before it was dammed, when a waterfall flowed where the pedestrian bridge now stands. He lives in and salvages fragments of Austin’s lost landscapes, some thousands of years old, barely buried under the present. Traces of the past no one else wants or can see engulf his house, awaiting scavengers who can archive or make use of them. That is how dorm windows that looked out on the vanished city came to peer in on the dream habitats of art yards. The windows now form the glass walls of Ephemerata Garden’s greenhouse, a workshop at Further Farms, Smut Putt Heaven’s windows/crutches structure filled with San Pedro and other cacti, and seasonal forms at the Cathedral of Junk.

Rock pile couch, take a seat. The porch overlooks a big drained pond once full of tropical fish and water lilies. We watch grackles dig for bugs in the ruined pond’s roots while the Professor pours out stories in a creek talk of whirlpools, grabbing things from piles to illustrate meandering lectures. He pulls animal bones and skulls from a black suitcase. “See how the antler was scraped away to make it balance? It’s weighted to your hands. Put it around your neck. The Apache and Comanche who lived here used this as a tool.” He shakes a piece of glass and a little bulbous stalactite from a pill bottle: “This is a piece of fulgurite, from lightning hitting sand. And this calcite formation has been altered, carved into Ixchel, Mayan Goddess of the moon, who walks with a rabbit on her shoulder. You can see her when the moon is three-quarter’s full, and the rabbit is very clear on her shoulder.” Hanson earned the nickname Professor for this constant stream of learned discourse. But he thinks of himself as a smart aleck scholar, ready to deflate expert knowledge–all those experts who don’t take his relics seriously.

According to Hanson, this neighborhood was one of the first spots in Austin colonized by the Spanish. “They found this populated garden and took over.” Anglos eventually built a narrow-gauge railroad steam-powered by a wooden locomotive–forgotten history down the block, where the railroad still runs freight into town. With a big pre-invasion population having lived around the modern-day tracks, he finds hand-hewn rocks everywhere down there and hauls them back up on his motorized wheelchair. He says every rock, bone, and piece of metal salvaged from the tracks carries some trace of human tinkering. Some stones have been hewn and weighted to spin perfectly, or to stand upright on a ledge’s lip. Others have exposed pockets of glimmering geodes, or concave fishscales from flint napping. You can see whirls of amber in a piece of fossilized palm wood. There are animal forms and profiles of women wearing elaborate headdresses, carved by women otherwise constantly grinding on matate. He passes around a heavy fossil mammoth bone excavated in the backyard while digging a well. Someone tuned this fifty-pound sitar-shaped limestone rock to produce two notes. See the wear marks where drumming fingers endlessly slapped the stone?

Like the rocks and relics, the drained pond embodies a possible past, tracing a lost ecology of relationships between characters and landscapes. While anoles, geckoes, spiny lizards, and the bugs they eat burrow in the rock cairns’ caverns, the pond habitat manifested the animal realm most intensely. “It was one of the most successful things I’ve ever done. It just worked: I built it, and all the animals came!” Two kinds of native tree frogs live in Austin, and one species moved in to the habitat. Sometimes they visited Hanson’s bedroom. Once a Great Blue Heron came down to hunt them. Vince remembers blooming lilies and insect dramas. “There was sort of an arms race, where the spiders built big webs over the pond, and the dragonflies would come down and cut the webs where they joined the trees. They learned to cut all the right places.” Not so many animals, since the pond’s been drained. Now the pond’s a concrete ruin, awaiting mortar patchwork and resealing with paint. Papyrus, pickerelweed, and dehydrated water lily roots survive in shallow puddles. Like the bamboo grove behind the pond, the patchy landscape is in ruins, gone wild and overgrown. Sun spears through bamboo blades to magenta and sky blue wood planks leaned against the back of the pond. More salvaged materials are propped against a little hand-built house beside the pond. The scene draws out a feeling in me of wanting to get to work, see it unfurl.

But what Hanson really needs help with is moving all the salvage wood, windows, rocks, and relics way from the burned-out house so it can be repaired. One day we work on relocating rocks to clear a path to the house. Another day, Vince gathers David and Susan, Scott Stevens, and Jen and I to make human chains and get some windows out of there. A good crew of six–we could start a moving company. While Vince hacks a path through the bamboo, Jen and I offer Hanson a Museum t-shirt illustrated with a Moontower, Austin’s first public lighting from 1895. He reminisces, “I lived right under a Moontower in west campus. Back then a lot more bugs clouded the lights, feeding flocks of nighthawks.” The bugs are gone now, so the birds are in decline, but the Moontower is preserved as a historic landmark. “There used to be a lot more bugs all over Austin–and butterflies.” Like the Colorado River waterfall that disappeared with the damming of Town Lake, this is the city that vanished. In the face of all this ruin, he sobs, “I identify with critters more and more, because the same people who want to crush critters want to crush me!”

The Professor likes old things, ways, and knowledges–anything that somehow survives–and The Old Place is a sort of database of these. “I’ve researched all kinds of hippie industries, like fruit silviculture, making soap, raising tilapia.” One day I drop by to see his repaired house with wheelchair ramp. A few folded blankets sit on the floor beside the huge loom he made them on. We talk about trees, a Chinaberry grove at the street’s dead end that Hanson watched grow about thirty years ago out of a scrapmetal “junk ecology” that sheltered saplings from the mower. “It’s good wood–they used it to build China cabinets,” professes the Professor. I complain about Hackberries at our house constantly dropping branches. Planted for fast-growing shade during Austin’s 1950s housing boom, now you see them falling apart all over the city. But the smart aleck scholar argues, “It’s a food tree. People lived off hackberry pies in the Depression. Lots of birds eat them, too.” Now the Hackberries provision invasive monk parakeets and migratory birds like cedar waxwings.

At first Hanson’s windows formed a greenhouse tacked on to our front carport. Last fall I framed out a new greenhouse in the backyard with lumber, concrete, and UV-blocking plastic roofing from Home Despot. On the north side I poured a narrow foundation for a bottle wall to build this fall or winter or some other vague future. The glass walls can be seasonally broken down and removed. They’re cobbled out of double-pane glass doors salvaged by a friend and variously sized windows from The Old Place and the Habitat for Humanity ReStore. Painted with gallons of cheap mistint lavender and bubblegum, Jen’s mom nicknames it “Barbie’s Greenhouse.” It’s an imperfectly sealed atmosphere that captures light and a little heat. We stuff all our potted plants and a curry tree in this bubble, just in time to survive winter.

Scott Webel is co-curator of the Museum of Natural & Artificial Ephemerata in Austin, Texas. He is currently finishing The City of Living Garbage, a guidebook to the urban ecology and aesthetics of his backyard.

This entry was posted on January 8, 2013 by The End of Austin in Built Environment, Death, Growth, Nature, Nostalgia and tagged Cathedral of Junk, development, East Austin, ecology, Issue 2, urban.