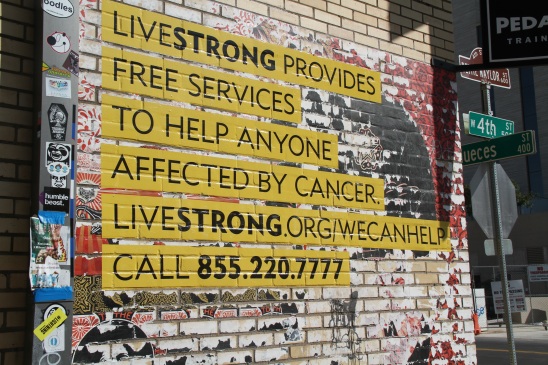 The wall at Mellow Johnny’s, December 2012 (photo by Randy Lewis)

Austin-based writer Richard Parker touched a nerve with his New York Times article about how Lance Armstrong’s rise and fall might reflect what could happen to the city where he lives and trains. Was Austin heading toward a hubristic fall like the one that wrecked Armstrong’s career? Was the city going to blow away in the cloud of its own hipster hype? Parker’s article started a conversation between the city’s boosters and detractors. TEOA sat down with Richard Parker over a brunch at La Condesa on Second Street, a trendy area described in his article as “Little Dallas,” for a conversation about the future of Austin.

What inspired your article?

I wrote the piece in The Times entirely out of affection for living here. I’ve been here 13 years and I’ve lived in Westlake, worked downtown, and live out in the hill country. So I’ve seen Austin from all kinds of vantage points.

The article had been in the offing for a while. The demise of Lance Armstrong’s public persona just coincided with a desire to write about a cool town in America that a lot of people really like.

We hear a lot about the buzz about Austin. Is that a real thing out there nationally?

I think it is a real thing. The town has generated a huge reservoir of goodwill. Every year the University of Texas produces however many graduates who go out in the world. Some of them stay in Texas, but a lot of them don’t. I was surprised by how many Texas Exes are on the editorial boards of the New York Times. In Washington and New York City there are huge colonies of freshly minted graduates from UT. These people go out into the world and implant a love of the city. And as the city has grown and built this music culture, that has done the same. It’s rooted in the kids coming out of UT. The tech business also brought a flow of people from California who have only heard good things about Austin.

What about the fear that Austin is losing its charm?

But the larger issue is not about culture. Culture is a reflection of geography, demography, and good fortune. The larger driving issue is going to be population growth. There are some very credible estimates about Austin doubling in size in a very short time frame. Beginning around 2020 and accelerating around 2050, you’re talking about huge pressures to wipe out the existing open spaces just to accommodate all of the people who are going to be here. Not to mention the enormous strain that’s going to put on infrastructure, mostly water supplies. We can argue about whether Austin is as cool as it used to be or not, but it’s a fairly trivial argument. The real risk to the Austin culture lies in its very success, which is population growth.

Growth will redefine the experience of Austin. It will no long be urban [as Austin sprawls outward into new suburbs]. Can you imagine an Austin where all the action is in Cedar Park, or at least that is how most people will perceive it because that is where most of the people will be? Then that becomes a totally different Austin. There’s nothing weird about that at all.

One of the things that Austin does well is tolerance. We shouldn’t turn up our noses at people who make realistic economic decisions to live in the suburbs. That’s just kind of an a-hole thing to do. One of the upsides of that is there are lots of Austins for people to experience. It is possible in a cultural sense that there are many different Austins. And culturally it may be possible to extend the Austin culture outward rather than turning our backs on it.

What about the impact of Formula One racing?

You’ve talked about the portability of Austin ideal–this sense that we can pick it up and bring it somewhere new. Especially as people get priced out of central Austin and start looking at surrounding towns, I wonder where is the next Austin going to emerge?

Wimberley is becoming a little more Austin-like. All the surrounding areas have picked up on the ease of manufacturing festivals for any reason whatsoever. And it works. It generates economic activity. It brings in people–they stop to buy a beer or lemonade or whatever they’re going to do. I’ve noticed that Wimberley has gotten more live music. They’ve loosened up the drinking rules. Now you can walk around Wimberley with an open container.

The thing that can kill Austin is unrestrained population growth that fails to integrate newcomers. It’ll completely change everything from the landscape to the experience. But the Wimberley example is a hopeful sign that the cultural part [of Austin] is completely exportable.

That’s a hopeful thought. I can’t think of anything better than more of the Austin spirit landing, say, in East Texas where my family lives.

Everybody is picking up on what works in Austin and doing it. Austin is exporting its culture to Bastrop, Dripping Springs, Wimberley, whatever… It could be that Austin becomes constrained by all this suburban sprawl and it just becomes nothing. Or it could be that it manages that growth, which is inevitable, and re-defines itself as a regional entity. You think about great cities. They are not just cities. New York is a region, Chicago is a region. Los Angeles is a region. Cities can run into the trap of defining themselves either too broadly or too narrow. Can I see Austin someday keeping the things that people love about it and being a region? Yeah. Just off the cuff, that’s probably the right answer.

You sound quite optimistic about Austin.

It’s a hard place not to be optimistic about, frankly. 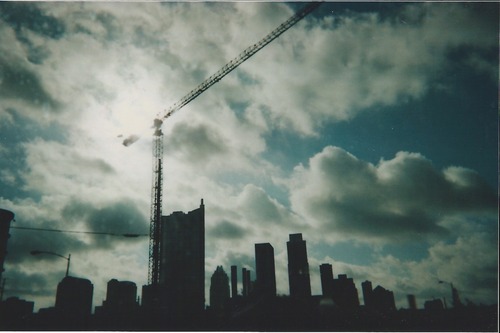 This entry was posted on January 10, 2013 by The End of Austin in Built Environment, Growth, Nature, Nostalgia and tagged Formula One, growth, Issue 2, Lance Armstrong, University of Texas.