Austin is a Graffiti Wall 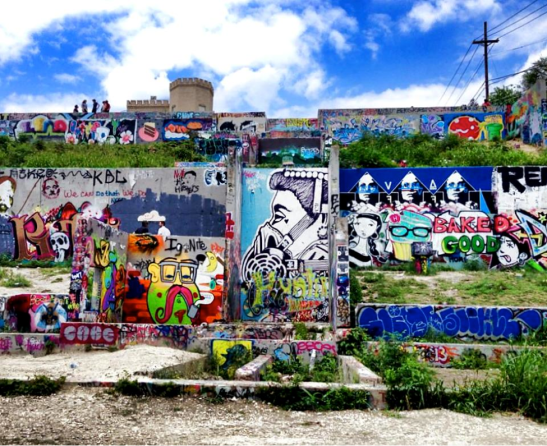 The aerosol boom of the 1980s gave rise to a new wave of street artists who commandeered the popular image of graffiti as an illicit and subversive medium and breathed new life into it. Street art is gradually shaking off its negative depictions within popular culture, and, in urban hubs like Austin, this process is expedited by the creation of dedicated graffiti spaces.

The Baylor Street Art Wall towers over the steady traffic flows of North Lamar Boulevard, formed by the skeleton of an abandoned condominium project. This surrealistic space overlooks downtown Austin, simultaneously conjuring the contradictory images of a chic locale and a subversive pastime. Unlike the sanctioned and socially legitimate presence of murals, the presence of graffiti is unsanctioned – a spattering of paint deemed illegitimate and unfit for the public sphere. Weaving through the treacherous footing and climbing to the top of the wall, visitors are reminded of the clandestine nature of graffiti art: empty alcohol bottles, discarded cigarette butts, and empty spray paint bottles litter the chasms of the graffiti wall, while other crevices were once occupied – possibly days at a time – by numerous street artists. Yet all the while, it is ironic that this particular space has become a sanctioned space, where any and all graffiti artists are permitted to express themselves through an untraditional – and historically persecuted – medium.

Like other forms of art, the graffiti at the Baylor Street Art Wall is used as a vehicle for social and political commentary. Messages condemning religions, government, and right to personal freedom represent the majority of the social and political artwork that exists on the art wall. A black and white rendition of renowned evolutionary biologist and atheist Richard Dawkins commands an entire east-facing wall, his eyes piercing onlookers who dare to read the quote spray-painted adjacent to his image: “God is a vindictive bloodthirsty ethnic cleanser, a misogynistic, homophobic racist, an infanticidal, genocidal, phillicidal, pestilential, megalomaniacal, sadomasochistic, capriciously malevolent bully.” Further up on Castle Hill, at the topmost portion of the art wall, spray-painted upside down in a nondescript white paint, are the words, “Art is not a crime” – a simple statement, yet loaded with the weight of social stigmas assigned to graffiti throughout history. Even more stunning, a realistic gray scale image of a child is painted on yet another wall – but this child does not have eyes. Rather, the eye sockets are hollow, and blood is dripping from them, another perplexing image in this landscape of abstract yet straightforward street art.

From these images, it is evident that there exists a subliminal message from artists to audiences to maintain their sense of creativity and self-awareness in a society that prides itself on homogeneity and individualism. The wall changes daily, as both traveling and local artists make their mark on the art wall by beginning, continuing, or finishing a new project constantly. Those imprints left behind by artists long gone speak in realms inaccessible to the unwilling listener; instead, it speaks to those willing to listen – to those seeking a perspective distinct from that of the conventional. It is here that new art is layered atop the old, symbolic of the incessant change that also occurs within the city of Austin itself.

The public presence of the Austin graffiti wall signifies a changing of attitudes from the “old,” which represented not only the intolerance of graffiti as legitimate art, but also the city of Austin of 30 years ago, prior to the development boom of the 1970s. Just like the constant change of art on the graffiti wall, so, too, does Austin undergo constant change from the influx of people, ideas, and technologies that flood into its boundaries. The presence of the Baylor Street Art Wall sits atop Castle Hill, standing as not only a tribute to the elusive nature of graffiti, but also as a silent – yet loud – testament to the changes within Austin.

3 comments on “Austin is a Graffiti Wall”