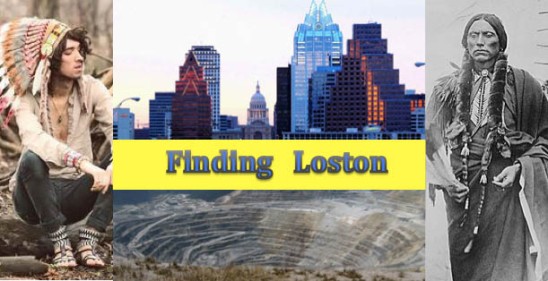 Is this the End of Austin? How presumptuous. Endings and Beginnings are always the same process. Austin has been around for a long time; only it wasn’t always called Austin. Stephen F. Austin was the first colonial White man in the area. Using his name to identify our city oversimplifies the dense history and limits the rich future of this place. This cultural territory is old. In fact, it is the oldest continually inhabited place in the Americas. The oldest arrow-point ever found in North or South America was found at the Gault archeological site near Round Rock at over 14 thousand years old. The oldest continually inhabited sacred site in the Americas is the Coahuiltecan presence at Spring Lake in San Marcos at 12 thousand years. “Austin” sits in the middle.

Texas was founded in a clustercuss of violence between three colonial powers and numerous native tribes, bands and nations. Multiple genocides were committed on the native peoples of central Texas. Natives were hunted, detained, converted and colonized in successive waves of Anglo, Mexican and other Native occupations. Amongst the violence, Natives were racialized in a way that slated them for extermination and denied them the most basic notion of human agency. The Texas Republic President Mirabeau Lamar, in 1839 said, “The proper policy to be pursued towards the barbarian race is absolute expulsion from the country. The white man and the red man cannot dwell in harmony together. Nature forbids it.”[1]

Indigenous people are still here though, despite that they may not appreciate federally recognized status or land accommodations. Coahuiltecans still do ceremonies at the San Marcos springs too. These ceremonies have also been attempted at Barton Springs, another Coahuiltecan sacred water site. Sadly, too many people continually interrupted the ceremony, wanting to know what was happening, and asking to participate, making it nearly impossible to complete the ritual properly. Barton Springs is no longer a suitable candidate for this native ceremony. It’s interesting that so much genuine curiosity and intrigue about Native culture drives liberal, white Austinites to disrupt Native ceremony, even to the point of being offended when asked to leave. In a similar fashion, the entire urban complex of Austin creates a parallel disruption of the Native community at large. There are more than a few explicit violations of Native sovereignty embedded into the political culture of this city – contributing to “The End of…” other places, other cultures and other peoples’ lives.

The Austonian high-rise condo tower in downtown Austin is now the highest residential building in the state. It boasts an elevated standard of living, and no doubt is providing one for those who can afford to it. The Austonian’s parent company, 2nd Congress Ltd is a subsidiary of Houston based Benchmark Development, itself a subsidiary of Spanish Transnational energy and fertilizer conglomerate Grupo Villar Mir (GVM). GVM is partially responsible for the mass displacement of thousands of Colombian peasants for construction of the El Quimbo dam project.[2] Next door, the 360 Condominiums, a stratus project (of Circle C infamy), is a subsidiary of Austin based Freeport McMoran, also a transnational mining and energy company. These hands are dirty. The largest goldmine in the world, the Grasberg mine in Irian Jaya, Indonesia is a high profile international case because of the direct displacement of over 4,000 native peoples and the contamination of 90 sq. miles of land.

The displacement of the Indigenous peoples in Indonesia is similar to the displacement wrought upon the Coahuiltecan descendants of South Texas, as well as the Apache, Comanche and Mexican peoples native to this area. These stories are tied together through the economic fabric stratifying our world and our city. A decolonial understanding of one situation requires a decolonial understanding of the other. The capitalist developers on each end connect these places materially, but they are also connected by a worldview that does not value people’s cultural connection to land.

The displacement of people of color from the Austin’s East Side is an ongoing affliction on the contemporary political landscape. People are being displaced from the East Riverside corridor at a rate that is leaving thousands of people with nowhere to live. Since there is little low-income housing in Austin and virtually none being built, we are creating an economic catastrophe with every negotiated development. City mandated “low-income” housing is like the Austonian’s “green” footprint. It is intended to promote the culture of urban expansion and to subsidize gentrification, not support families with actual low-incomes.

The African American community, once legally relegated to the Central East Side is continually displaced from their cultural territory just as indigenous peoples and Mexicans before them. With no value of cultural territory, only a value for private property, Austin’s political and economic elite expands their Austin at the disadvantage of other culturally rooted communities.

What can we say about the culture that is replacing the longstanding Austin communities? We can be certain that the new Austinites are either oblivious to the ongoing displacement implied by their lives and lifestyles or are unfazed by it. How long did it take East Sixth to go from full of Mexican cantinas to White hipster row? – A couple of years. With an exclusive business alliance, raised property rates and an influx of disposable income, we can transform any sector of the city to serve the upper-class (or at least their up and coming offspring).

Who decided to expand the high-rises? Who decided to gentrify East Austin? What about the ongoing displacement of “weird” Austin? All the large-scale urban development I have seen lately looks like Mueller – a strip mall connected to a subdivision. What is the opposite of “weird” if not that? How “normal” can you get? How normal do we assume the development of this city and the world to be? The mass displacement and expansion of industrial capital is not consciously decided upon, it is complied with, as if expected, as if normal. We are lost.

Instead of thinking about Austin ending, perhaps we should think of something that has been lost, something we are searching for. Instead of Austin, why don’t we call it Loston or Lost-Town or Ciudad Peridida or just Perdita? Perdita has been here for thousands of years, and I think it will be for thousands more, but only when people can find themselves historically, politically and economically as connected with a larger world. How can we connect Perdita with the end of the colonial industrializing West, the End of capitalism, or the end of inequality? And what will this be the beginning of? It may take a hundred years to find ourselves. Let’s build the foundation of society rooted in cultural territory. Let’s construct a city rooted in connections to land, not ownership of it. We may not see the great change in our lifetime. But this place will be here, long after we are gone.

[2] GVR appreciates 30% of the holdings of the project. Italian based Enel and Colombian based Emgesa own the rest.

Tane Ward is the executive director of the Indigenous Cultures Institute and has engaged in indigenous and decolonial activism for over ten years. He studies Activist Anthropology and Native American and Indigenous studies at the University of Texas, and will receive his PhD in 2014. Tane lives with his wife, daughter and extended family in East Austin, where he is an educator and community organizer.