Grackles are sleek birds that wear the expression of rapacious fishes. Many years of cohabitation with humans has not loosened the danger on which they seem to insist. Perhaps it is their fast thin legs and tiny black beaks that give this impression. Sometimes they look at you as if to say “Pardon?” with stooped shoulders glistening in the sun, plumes blue, violet, and iridescent. They move quickly, look sharply. They convey a sense of their proneness to easy and groundless irritation in the way they walk, like miniature caricatures of the Tyrannosaurus Rex, like a child’s plastic model of once dangerous carnivores.

Austin is full of old cars; charming rusty jalopies, four-wheeled embodiments of sentimentality. They inflict a pleasant pang of nostalgia even if you, like me, are from a place that has nothing to do with the American brand of fleeting monumentality. The little commemorations to themselves, the rusty Cadillacs, Fords, Oldsmobiles, Chevrolets, Buicks, and other breeds, are scattered around Austin and its outskirts, some of them enmeshed in rustication, stopped for good, lying low in the grass; others are still moving to and fro, glistening with rear mirrors and chromed bumpers and handles, honking, revving their engines, roaring and flaring, navigating space and time. 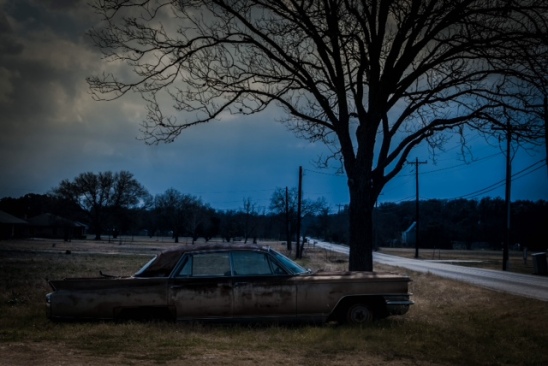 Vasilina Orlova was born in the village of Dunnai in the Russian Far East in 1979. She has lived in Vladivostok, Moscow, and London, and is now based in Austin, United States. She holds a Ph.D. in philosophy and is the author of seven novels in Russian—among them The Voice of Fine Stillness, The Wilderness, and The Supper of a Praying Mantis. She has also published several books of prose and poetry, including Yesterday, The Wilderness, and Quartet. She is the recipient of several Russian literary awards and is a laureate of the Anton Delvig Prize for the poetry book Barefoot (2008). She has written in English since 2012, her first publication in the language being in Di-Vêrsé-City, the Austin International Poetry Festival anthology. She translates the works of Russian and American classical and contemporary poets. Her poetry and prose has been translated into English, French, Spanish, Bulgarian, Ukrainian, and Russian.

This entry was posted on May 22, 2014 by The End of Austin in cars, Creative Writing, Ecology, Nature, Photography and tagged animals, cars, Issue 5, poetry, Russia, Vasilina Orlova.