TEOA is always attuned to the great Austin lament about weirdness drying up as quickly as our increasingly parched lakes. Native Austinite Riley Triggs adds his voice to the chorus of those worried about what the city is becoming. As he puts it below, “there is no time for mourning, as we spend more of our day stuck in the traffic “COOL” brings.” 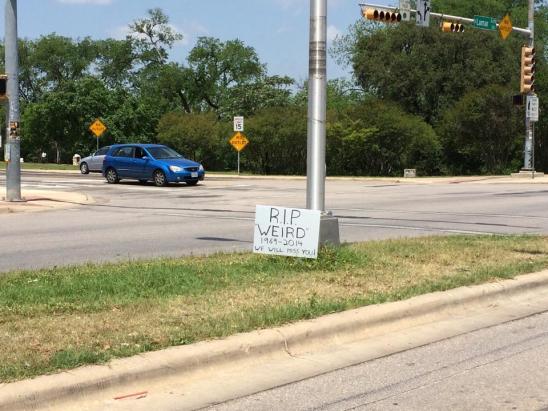 Tombstone at intersection of Riverside and S.Lamar. Photo by author.

I actually called time of death for “WEIRD” in Fall 2012 if I remember correctly. It was during a graduate Design seminar session I was teaching at UT on ‘value’, and I used it as an example of the difference between those who create value and those who extract value and the corresponding events when value is extracted and not replenished. I commented that Austin was no longer weird, and that it was now cool, because people are now coming here to extract weird instead of helping to create more weird.

1969 marks the year when the hippies were forced out of the San Francisco neighborhood of Haight Ashbury by the influx of outsiders initially drawn by the allure of joining a cultural utopia during the Summer of Love in 1967. What followed was a predictable trajectory of overcrowding, crime and a dilution of the critical mass of the creators of the utopia.

Before leaving, the original inhabitants held a mock ceremony, “The Death of the Hippie” to signal the end of the cultural scene. They then left the neighborhood and some of them settled in Austin’s Clarksville neighborhood bringing the drug culture, a craft-making ethic, alternative thinking, music, environmentalism, and a general creative mindset that reverberated with an already fertile indigenous creative class of artists, academics, literary figures, outdoorsmen, technology mavericks and political critics.

The combination of these creative thinkers shaped Austin’s defense of the Violet Crown’s jewel Barton Springs and gave rise to the Live Music Capital of the World. It birthed Leslie, the East Austin Studio Tour, experimental food trailers, Armadillo World Headquarters, and everything else that now draws people from all over the world to ACL, SXSW, and F1.

In the wake of the passing of “WEIRD”, we are left with an upsurge of finer dining, a taste for better architecture, solid orchestra and ballet troupes, rocketing population growth, burgeoning mass transit, a more walkable downtown, and a general hint of sophisticated cosmopolitan niceties battling with the laid back jean and shorts aesthetic.

To conclude that Austin has matured maybe doesn’t do “WEIRD” justice. It is probably more accurate to do as this sign maker did and just note its slipping into one’s personal history crowded with vivid memories of Aqua Fest, Eeyore’s Birthday and Spamarama.

There was no funeral for “WEIRD” as the hippie received in San Francisco, the death was not televised, and no tech start up created an iPhone app as either a last will and testament nor an illustrated obituary.

All there is to mark the passing of an era and a unique sensibility is a hand printed tombstone that will no doubt be stolen soon by someone collecting cool Austin artifacts to take back home to California, New York or maybe even the French Riviera before they move here later this year.

As Waterloo transformed into Austin, maybe it is time for Austin to become something else, although “Keep Austin Cool” neither has the same ring nor the same raison d’etre.

And there is no time for mourning, as we spend more of our day stuck in the traffic “COOL” brings. Life is now more of a chore and less carefree, as the native Austinites seek out corners of the city that remind them of a time when “WEIRD” was a satisfying, sleepy, and constant companion on endless, warm summer nights.

All there is time for now is cashing in on the celebrity Austin has become, and maybe drifting down to San Marcos or trekking up to Buffalo to start the cycle again.

And if you are so inclined to raise your voice to this dark and dreary night, maybe a quick and half-hearted chant to seal the coffin and pass the Violet Crown?

Native Austinite Riley Triggs is a practicing architect and former professor at the University of Texas. He received his professional degree in architecture from UT and a graduate degree in architecture from Rice University where he explored the emotional space shared between humans and architecture. He is currently pursuing a PhD in sustainable architecture about place, environment and building performance. He is on the SXSW advisory board and is a founding board member of the MidTexMod regional chapter of DOCOMOMO, the international group for the documentation and conservation of buildings, sites, and neighborhoods of the modern movement. An earlier version of this piece appeared in the Austin American-Statesman.