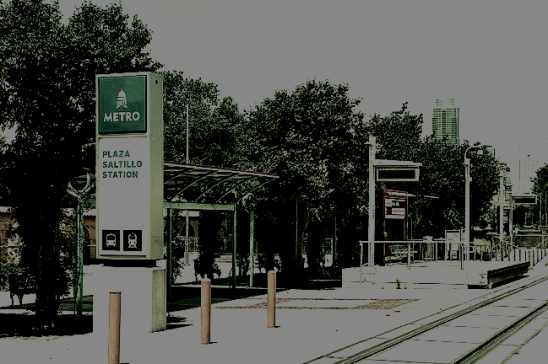 On Sundays, Plaza Saltillo is transformed from a silent concrete station into the lively HOPE community farmers’ market. In the small gazebo at the west end of the plaza, a bluegrass band wails a sad tune of love lost. The market has set out serape blankets where friends and families sit and enjoy the twang of the guitar. Fortunately, I arrive in time for the regularly scheduled band, The Harvest Thieves. Dogs scurry underfoot, chasing one another between the booths as children draw chalk murals on the concrete or challenge each other to beanbag tosses and tag, while their families chat nearby. Women in large sun hats enjoy the mid-afternoon heat as they sip on organic hibiscus teas and lemonades. Couples laugh on the benches under the row of wisteria-covered arches. Some are enjoying a nice read, sprawled out in the sun.

A second row of arches on the opposite side of the plaza shelters a string of vendors selling local produce, art, and wares. People mosey around the plaza, talking to vendors or just admiring their products. At the far end of the arches is Johnson’s Backyard Garden stand, where customers peruse the rows looking for seasonal produce. The produce is relatively expensive, at nearly four dollars for a bundle of carrots, but there are many young couples buying it, usually in small quantities. Next to JBG, at Nile Valley Teas and Lemonades, children cluster around bright drinks and repeatedly take samples. Casually dressed posses tote workout bags or yoga mats; they are known by vendors as the “after yoga crowd”. The tide of people ebbing and flowing through the stands adds to the buzz of the market.

There is a stark difference between Plaza Saltillo on Sunday and on Wednesday afternoons. Deserted, the plaza only offers temporary shade for commuters traveling the Downtown to Leander circuit. Several rows of wisteria complement the blooming azalea bushes that surround the plaza. Plaza Saltillo is surprisingly quiet given its location in the center of the East Austin industrial and arts district. Every fifteen minutes, a high-speed train zips through the empty station. Occasionally, a biker will pull up just before the train arrives, cast a glance at me, and then hop on the train. When the train stops to unload commuters, they quickly vanish into the neighborhood around 5th and Comal. There is no conversation or social interaction. The plaza once again sits unoccupied. I feel uneasy alone on the empty plaza as the sun is setting.

I hardly notice a biker pull up alongside me at the train station until he begins rummaging through his bag looking for his ticket. He explains that he works at a nearby metal shop. He once lived close to his work, but as a result of rising property values, he was forced out of the neighborhood. He notes the rising prices around Austin and stresses that the process of gentrification will only get worse in other areas. Another man joins in the conversation; he was previously jamming with large headphones on. He laments the rising prices of homes and claims the same process of gentrification happened in his former south Austin community. He is now a daily commuter who travels nearly twelve miles via Metrorail to his home in Howard. When I asked both men about their use of the plaza, both said they only come to Plaza Saltillo for the train. All of the patrons I asked claimed that they did not visit the Plaza except en route to their home or place of work.

Though only a few blocks away, the plaza seems distant from the nearby East Sixth scene, made up of small, artsy bungalows with murals and aged brick. These repurposed homes are now local bars, restaurants, or artisanal shops. East Sixth is hopping as young people crowd into acclaimed eateries. Newer, larger houses are filling the dilapidated lots that surround the plaza and the empty fields nearby. The neighborhood is undergoing a revitalization of sorts, but the difference in atmosphere between Plaza Saltillo during the week and during market hours is stunning.

There is a large ceramic tile mosaic in the center of Plaza Saltillo depicting the traditional Mexican ballet folklorico dance. Women wear full white dresses with colorful trim, and men wear sombreros and a traditional western Spanish charro suit, indigenous to the state of Jalisco. This image of two ballet folklorico dancers references the surrounding neighborhood’s Latino roots. The area north of Third Street, south of Sixth Street, and east of 1-35, once largely residential with about sixty percent of land used for housing, is known as the “East César Chávez” neighborhood. Because the neighborhood was traditionally low-income and more than 75% Latino, and a stronghold for the artist community, there was a distinctive local culture.

Located in the heart of the East César Chávez neighborhood, the Plaza has been recently redeveloped as a Capital MetroRail Station. With nine stops covering roughly thirty-two miles of urban space between Leander and Downtown Austin, the MetroRail attempts to give commuters a faster higher-end public transportation option. Part of the initiative of Capital Metro is “transit-oriented development” (TOD). The Transit Cooperative Research Program, a branch of the Federal Transit Administration, developed a report explaining the scope and goals of TOD, which claims, “transit-oriented development has gained currency in the United States as a means of promoting smart growth, injecting vitality into declining inner-city settings, and expanding lifestyle choices.[i] According to Capital Metro, based in Austin, “TOD creates a transit-friendly walkable community with a mix of people, jobs, and services.”[ii] To do this, Capital Metro partners with constituent communities, and seeks to increase ridership, revenues from development, and transport choices for community members.

TOD on Plaza Saltillo is an example of developers capitalizing on lower land costs. As a result of a recent Capital Area Metropolitan Planning Organization (CAMPO) grant decision, eleven acres of land surrounding Plaza Saltillo will be developed into residences and retailers. TOD initiatives are intended to provide economic opportunities to lower-income communities while fostering a safe and sustainable sense of place around transportation hubs. Capital Metro’s attempt to redevelop the heart of the East César Chávez neighborhood has increased the rate of gentrification, but ironically results in underutilized space. Older community members are not drawn to the space, while the younger working class professionals use the plaza only for transportation.

The plaza itself reflects a larger community divide between the incoming young professionals and the longtime Latino residents. It was designed to support local values while creating a safe space for community engagement. However, the area targeted by TOD near Plaza Saltillo has already undergone dramatic gentrification, and rather than fostering community inclusivity and engagement, the transit line is contributing to a new system of identification among East César Chávez residents. This reorganization of culture leads to a reconstruction of class identity in the urban core. As core areas undergo gentrification, boundaries of class change. As illustrated in Plaza Saltillo, there are clear divides between commuters using the train station, the Latino community, and the wealthier patrons of the farmers’ market. Several of the commuters referred to the trains as the public transportation of the “professional class”, explaining that the “lower class” relies on the bus system. The lower income residents of East César Chávez do not frequent the HOPE Market, even though it claims to accommodate local growers and SNAP food stamps. Therefore, the market caters to the newer, wealthier residents of the neighborhood by providing live music, locally sourced food, artisan shops, and space for nonprofits.

The CAMPO decision resulted in the Endeavor Plan for the development of eleven acres adjacent to Plaza Saltillo, including about 800 residences, only about 200 of which will be considered “affordable housing” options. The mixed-use construction will include retail space, a grocer, and several dining locations. Ultimately, this increase of residential property in a prime location will only continue to attract young professionals eager to partake in the “Austin lifestyle”. Perhaps this is the demographic that will frequent the market in its current state. However, to better serve the incoming residents as well as the existing community, the HOPE Farmer’s Market will need to increase its range of affordable practical goods, including fruits, vegetables, and dairy. Given the already limited traditional grocery options in this area, an expanded and accessible market providing a wide range of produce options would be advantageous to neighborhood residents old and new. A more inclusive and accessible farmers’ market would raise the Plaza’s visibility to neighborhood residents, thereby making it more permeable to the everyday life of the community. This new potential for access would perhaps also make the MetroRail a more viable transportation alternative.

Olivia Arena is a Plan II Honors/ Urban Studies/ International Relations junior at the University of Texas. She is interested in the way governments react to climate change and develop sustainable practices in urban environments.

This entry was posted on February 7, 2015 by The End of Austin in East Austin, gentrification, rail, urban planning and tagged East Sixth, farm, market, plaza saltillo.