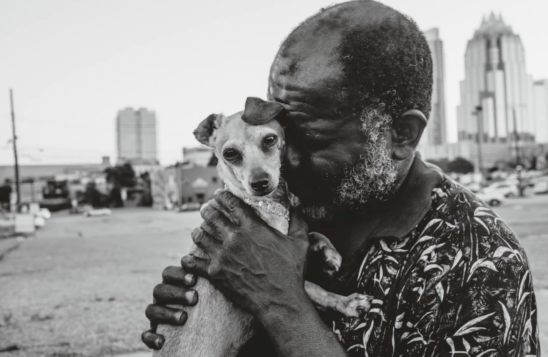 The celebrated documentary photographer Matt Black ran a weeklong photography workshop in Austin during May 2016. A collaboration between Magnum Photos and the Harry Ransom Center (and organized by the HRC Academic Curator of Photography, Steven Hoelscher), the workshop attracted fourteen students from both Texas and across the United States (plus Australia and Canada), who were led through an intensive daily program of shooting, reviews, group critiques, and editing sessions. Black explains: “The effects of gentrification and rapid growth were on the minds of the 14 photographer-participants in my Austin workshop.  From a trailer park on the verge of shutdown and the closing of a local piñata shop to neighborhoods dwarfed by a growing downtown skyline, the photographers dealt with this theme of change in their own ways, resulting in this broad and very human portrait of a community in flux.” The video below features some of the best photos from the workshop, with contributions from Melissa Renwick, John Pike, Annette Bonnier, Amalia Diaz, Daniel DiScala, Alana Aphoy, Ben Blood, Gabriel Morales, Beth Donnelly, Rupert Chambers, Bernadette Pollard, John Mitchell, Scott Paxton, and Anahi Navarro.

Matt Black’s work has explored the connections between migration, poverty, agriculture, and the environment in his native rural California and in southern Mexico. In 2014, he began the project The Geography of Poverty, a digital documentary work that combines geotagged photographs with census data to map and document poor communities. In the summer of 2015, he completed a thirty-state trip photographing seventy of America’s poorest places. Other recent works include The Dry Land, about the impact of drought on California’s agricultural communities, and The Monster in the Mountains, about the disappearance of forty-three students in the southern Mexican state of Guerrero. Both of these projects, accompanied by short films, were published by The New Yorker.

Matt is a contributor to the @everydayusa photographers’ collective and has produced video pieces for msnbc.com, Orion Magazine, and The New Yorker. He has taught photography with the Foundry Photojournalism Workshops, the Eddie Adams Workshop, Leica Fotografie International, and the Los Angeles Center of Photography. Anastasia Photo gallery in New York represents his prints. He was nominated to Magnum Photos in 2015. To read more about him, please see his website as well as his Magnum webpage.

(Photo at top from Anahi Navarro, one of the students in the workshop whose work is featured in the video above).

This entry was posted on May 24, 2016 by The End of Austin in East Austin, gentrification, Photography, Uncategorized.