The Curious Case of Clarksville 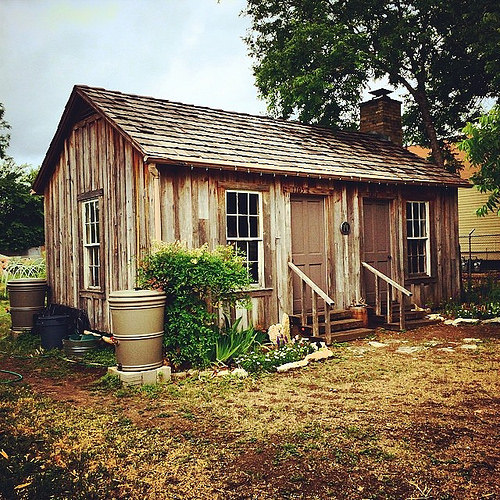 It’s no secret that Austin, Texas is a growing town. Residents gripe about the weak infrastructure, how the bustling tech industry has made the city less weird, and the pains of rapid development pushing the boundaries of downtown farther and farther east. Our South By Southwest is too commercial and can everyone please just move to Dallas, we hear it’s great. Many critics focus on the neighborhoods east of I-35—once Jim Crow-ed into a racially segregated ghetto, and now the butt of Portlandia sketches on gentrification. These hotly debated changes highlight the ripple effect of racially charged urban development that happened not so long ago west of downtown, in Clarksville.

Today, if you were to stroll down West Lynn Street, one of Clarksville’s commercial centers, bordered by North Lamar to the east, Enfield road to the north, West 5th to the south and MoPac highway to the west, you might pop into Medici for an espresso drink or swing by Jeffrey’s, touted as fine dining neighborhood institution, for an aged steak. Audis, BMWs and Range Rovers fill the parking lots. This generation of Clarksville residents is wealthy and overwhelmingly white.

The Haskell House, a board-and-batten structure with two front doors, stands on 1705 Waterston Ave., a four minute walk west from Josephine House, the sister restaurant to Jeffrey’s. Josephine House’s website refers to the “historic Clarksville neighborhood” but the Haskell House is much more representative of what exactly the area’s historic significance entails—Clarksville is the oldest surviving freedomtown in the United States west of the Mississippi river. Traces of this post-Civil War settlement, founded by former slaves, have all but disappeared from the neighborhood.

In the early twentieth century, in an attempt to force the black population of Austin to congregate on the east of the city, public services were shut off in Clarksville. Either residents could choose to use such services in east Austin, or none at all. The community that remained, surrounded by woods, used kerosene lamps until 1930. In 1968, this racially entrenched struggle between long-term residents and the local and state government continued. The plan to build a highway along the Missouri Pacific Railroad, which extended along the western boundary of Clarksville, was approved despite protests. The completed MoPac Expressway cut through the community, forcing the relocation of several families.

It wasn’t until 1976 that the city approved the use of $100,000 from a federal housing and community-development grant to permanently pave Clarksville’s dirt streets, improve drainage, and expand the neighborhood playground, and extend another $100,000 was designated for housing rehabilitation. In this same year a new development plan to connect I-35 and MoPac, creating a thoroughfare that would run through the neighborhood, was defeated by residents and their supporters.  Things seemed to be looking up for the neighborhood—the area was added to the National Register of Historic Places in 1976, which would provide protection from demolitions like the MoPac project.

What follows is probably the most predictable part of the story. Once Clarksville was on the city of Austin’s grid, its close proximity to a growing downtown made it an attractive, and affordable place to live and open businesses. In the mid to late 1970s stores like Sledd’s Nursery, and Clarksville Natural Grocery (what would become the first Whole Foods) opened their doors. Many residents were priced out of the neighborhood, as property values skyrocketed.

Clarksville’s history of segregation and discrimination is a particularly harrowing example of Austin’s legacy of racially charged urban development. The years during which Austin’s black population was limited from buying property and building wealth throughout the city have contributed to the current climate that we are experiencing on the east side today. And, I wonder, what would be a more integral approach to housing that would acknowledge these structural imbalances and move toward more equitable development.

Catalina Iannone is a doctoral candidate in the Department of Spanish and Portuguese at the University of Texas at Austin where she studies the intersectionality of race, rhetoric, and urban space in Madrid and Lisbon.

This entry was posted on May 24, 2016 by The End of Austin in architecture, gentrification, geography, Growth, History, preservation, Race.