Austin Within and Beyond the Dome

As improbable as the metaphor might seem, Austin is a glimmering and warming snow globe. A steadily growing number of tourists behold a beautiful kingdom of sun. Austin is a model of Sunbelt success that can be held up and gazed upon lovingly. It is built on high tech and live music, independent businesses, a “world-class” educational system that joins local government and nonprofits in a commitment to sustainability, gorgeous parks and natural areas, and a strong sense of place.[1] A new city-wide plan imagines Austin as sustainable, equitable, and creative.[2] Austin’s skyline reaches new heights of optimism as its metropolitan population expands. More and more people are drawn to the beacon.

The bounds of the Austin snow globe are the highways that form an inner beltline — Research Boulevard to the north and Ben White to the South, I-35 to the East, Mo-Pac to the West. Along these giant Texas- highways one finds soaring “flyovers,” curving ramps hundreds of feet in the air that quickly bring any motorist a sobering view of the edge of the dome. These curving highway ramps defy both gravity and reason. (It is a miracle that more cars do not careen off them and into the precipice.) From the top of a flyover, one can view an edge landscape that extends for miles, complete with speculative office buildings, shopping centers, parking lots and subdivisions. 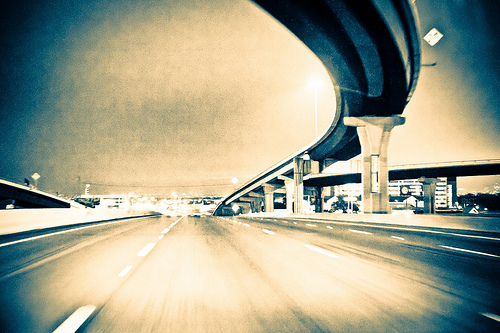 These edge landscapes seem well beyond Austin’s center dynasty of sustainability, which fades quickly as one moves outward from downtown. Farther from downtown one finds scenes of grinding suburban poverty.[3] Also on the edge, and behind enormous replicated ranch gates, suburban wealth is sequestered. Contradictions abound as one moves from center image to the expanses of metropolitan growth.

An astronaut suit should be required to cross Austin’s formidable arterials. Pedestrians are vulnerable to a hostile landscape of angry traffic and unrelenting Texas sun. And yet residents are regularly forced to cross massive Austin roads without suitable protection and often pay a mortal toll.[4] Here, well beyond the snow globe’s national reputation, is an edge geography that seems left out of the creative and sustainable esprit de core celebrated in Austin’s center.

A snow globe is a place of hopeful fragility. In order to survive in an actual dome, there must be a closed system of clean air and adequate water. These requirements are far from secure as temperatures rise and water becomes scarce.[5] An empire built on air-tight, air-conditioned spaces; still reasonably cheap oil; and dwindling water supplies seems markedly insecure.

A snow globe is simultaneously exclusive domain and a trinket.[6] As the real estate at the center of the dome becomes more desirable, people of modest means are pressed farther outside of it. Working families must increasingly find homes at the edge.[7] They trade longer commutes to find mortgages for which they qualify (or at least a suitable place where they can afford the rent.) Meanwhile, a growing number of people are drawn to opportunities to live within the globe. Glitter and celebrated Austin places readily obscure inequities within the dome. Mediocre and ill-managed apartments are hidden from the external view. Meanwhile, others remain outside the globe, enviously, fruitlessly looking at the unattainable magical kingdom inside.

In reality, Austin may be just a few miles south of Detroit. The boom and bust of entire urban fortunes can bleed out, shattered when capital moves elsewhere. We continue to create snow globes from real places to our peril. Communities can only be sustained when we rediscover the intertwined relationships between urban, surburban and rural fortunes and plan for futures beyond the dome.

Jennifer Minner is an Assistant Professor at Cornell University.  She earned a PhD in community and regional planning from the University of Texas at Austin School of Architecture. There she studied Austin’s commercial strips as landscapes of thrift and reinvestment, wicked problems and sustainable possibilities.

[6] Interestingly and somewhat ironically, when one googles “Austin snow globes,” one of the first links is to a product listed on the Saks Fifth Avenue website. Additional links show the same “limited edition” product is available at Sue Patrick, a “family owned specialty store” and “Austin tradition since 1975.” Bats and glitter replace snow. The product is described as featuring “the Zachary Scott Theatre, The State Capital, UT Tower, Penneybacker Bridge, Frost Bank Tower, Sixth Street Music District and the 2nd Street Area and of course the famous bats. Black musical base plays ‘Deep in the Heart of Texas.’” From http://www.suepatrick.com/gifts/collegiate/9503_new.html. (Last Accessed 11/30/2013).