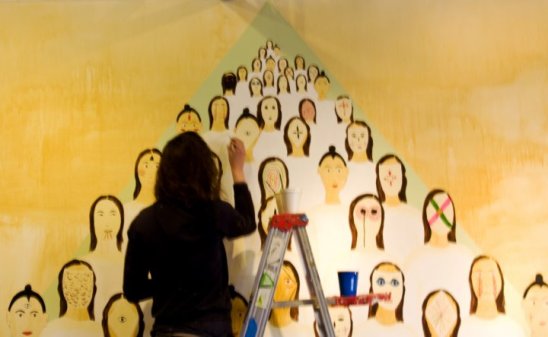 The year is 2010, a time when Austin isn’t completely overrun with condos, cranes, and “hipsters” just yet, even during the infamous SXSW music festival. My favorite shows are lovingly named Fuck by Fuck West and Sux by Sux West, both christened by punk and noise artists trying to capture the spirit that plenty of struggling musicians living in Austin feel about their town being overrun and invaded by celebrities, big bands, start-up companies, and grown adults who are seemingly unable to find a trash can for their empty beverages. These shows were often thrown in lesser known venues and dive bars outside of official showcases in dark dingy spaces with just the right amount of people. Fuck by Fuck West was an all-day, outdoors event with a variety of groups ranging from street punk to thrash, along with noise artists from all over. Sux by was similar although it primarily featured noise and experimental artists, and it sadly ended its five-year run of unofficial showcases in 2015. I enjoyed these particular shows because I was able to see and feel sound in a way I’d never experienced it before.

Back then SXSW was still somewhat pure and infantile. You would hear more unknown local musicians in the streets at small local venues and house parties, or you’d overhear it coming from residents’ backyards as you were walking through streets on the east side. Busking was still a legal and viable trade that I dearly miss. That’s right, those irritating and dangerous bums that UT students often complain about used to be able to play music for money and entertain people as a viable source of trade and commerce. As far as I can see SXSW has been a huge disservice to the often creative and talented homeless community in Austin. Permitting has also made it difficult to throw large house party shows during this time without the fear of being in violation of new city codes that were created to stomp out the more organic side of SXSW and feed the money-making machine. House shows were a way of lesser known traveling bands to play without being accepted into an official showcase. 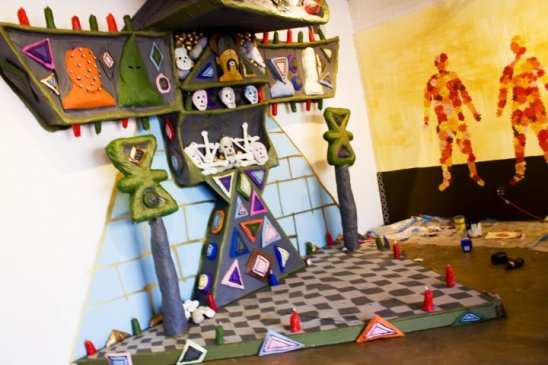 Now when you walk around SXSW you’re likely to see a heavy toll of filth and loud speakers, huge crowds, long lines, and some kind of black plague that happens after you mix a bunch of drugs, alcohol, and sleepless nights together. Many of you know the the 2-4 week recovery period after such festivities highlighted by free booze, fast food, and big-name bands.

That said, SXSW 2010 was special for me because a lot of my friends were breaking out of old bands, such as the Silver Pines, and forming into new groups that evolved out of the folk/indie rock phase and into electronica and synth-driven music, like Sleep Over, Boyfriend, Survive, and Pure X. 2010 sticks out not only because of this switchover in musical exploration but also because it’s the last year I can recall the art collective Okay Mountain’s space still being open and available as a small venue and gallery space.

Okay Mountain went the way a lot of galleries and studios on the east side go, meaning the collective eventually grew out of its space and moved to various other major cities where the artists involved were able to find better work, more opportunities and/or potential buyers. There was a time in Austin when house galleries were a tangible and cheap option for presenting local work. Many of these galleries were located along Cesar Chavez, such as Art Palace (now in Houston) and Birdhouse.

As an artist, the moments that stand out the most in my mind are the ones that found a way to combine art and music thoughtfully. Where the environment is conducive to the experience of the sound instead of the typical, blaringly loud, crowded venue. Festivals, clubs, and large crowds are no longer my cup of tea. However, the days that shine brightly are the ones awakening the joy of spring in outdoor spaces with mild temperatures, cool breezes, and a keg of beer. This is the old Austin I used to know. These days you’d be hard-pressed to find a gallery willing to combine these ultimate aspects of chill. Yet it works; whenever people’s eyes aren’t glued to the musicians, they’re out grazing some art. It’s a perfect balance for introverts like me as it fills the void of awkwardness that sometimes comes when you can’t quite fit into a conversation. Okay Mountain was one of a few modest spaces that cultivated a friendly atmosphere, combining an exhibition space, a retail shop and an equally quaint backyard. It was an ideal space for budding artists and musicians alike a place to do what they do best—share and mingle among other creative types.

Chantelle Rodriguez is a native Texan, an interdisciplinary performance artist, and an educator. She has been a professional working artist in Austin for over a decade, utilizing and teaching printmaking, photography, collage, and painting. She is also an electronic/experimental noise musician with solo performances under the name Modesty and APSARA. Currently she resides in West Texas after living in Austin for twenty years. Her visual work can be found here.

This entry was posted on May 23, 2016 by The End of Austin in Art, East Austin, Music, Nostalgia and tagged art, East Austin, hipsters, music, nostalgia, South by Southwest.